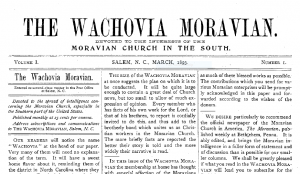 One of the best resources for Moravian Church study is the monthly newspaper, The Wachovia Moravian. Over 77 years, from March 1893 to August 1970 The Wachovia Moravian recorded the life and activities of the Moravian Church, Southern Province. Ministers, missionaries, workers, and laity all contributed to the historical record. Church and secular events, baptisms, marriages, and deaths, and even advertisements provide a window to the world as seen in its pages. The Wachovia Moravian has been scanned and is available on our Reading Room computers and here online.

Notes from a former Archivist: This “edition” of The Wachovia Moravian is taken from microfilms. The issues from March 1893 through December 1914 were provided courtesy of the North Carolina Newspaper Project of the North Carolina Office of Archives and History. The remaining issues to August 1970 were microfilmed from the collection of the Moravian Archives, Winston-Salem, North Carolina. Every issue is computer searchable except for an occasional “white” copy (for example, March 1893). The handwritten dates on many of the issues were kindly provided by the late Burton and Anna Snyder, more widely known as devoted band members of Fairview Moravian Church. It must be remembered that those who wrote for The Wachovia Moravian did so with the most advanced insight of their time, which to our more finely attuned sensibilities may seem quaint or even offensive. But they were doing their best in presenting the mission field history for such remote lands (at the time) as Nicaragua, Alaska, Southern Africa, and India.

Give to our Technology Fund

Monies will purchase new computers and software allowing the Archives to better access and share its holdings. We have reached our initial goal, but will still accept donations. More info here.

We are currently closed to visitors until the new Assistant Archivist is hired in the new year. Meanwhile, please feel free to email your research questions, and we will help as we are able.

Parking is in the northwest corner of the lot at the western end of SR 4326 (Rams Drive) off Salem Avenue. The same street serves as entry to the Elbertson Fine Arts Center at Salem College. When we reopen, our hours will be Monday-Friday (excepting holidays), 10:00 a.m. – noon, 1:00-4:00 p.m. by appointment only. We invite you to contact us to plan your visit.